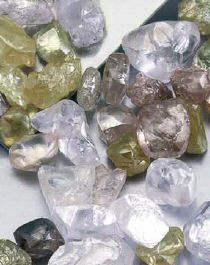 It has been a difficult year for the diamond industry.  Prices and demand for polished goods are steadily falling.  De Beers sights are getting smaller and more lots are being deferred or rejected.   Prices of rough were reduced in May and August.  So far, none of this has helped re-ignite the diamond market.

The last few weeks saw several more blows to the stability of the diamond market.  At the October sight, De Beers held on to its tried and true strategy of maintaining prices while lowering production.  Year to year output is down 27%.  Yet more than half of the diamonds at the October sight went unsold.  For the November sight, it was announced they would allow 100% deferment.

To make matters worse, De Beers offered after-the-sight discounts to select sightholders in order to move goods that were rejected as overpriced. The deeply discounted goods immediately appeared on the open market at prices well below the list prices, eroding the confidence and profits of the rest of the sightholders who bought at full list price.

After decades of fooling the public about the rarity and value of diamonds,  De Beers is now blowing smoke at itself.  They are blaming the diamond crises on the economy, the dwindling Chinese demand for diamonds, and banks refusing to finance rough diamond purchases.  Perhaps they need to start blaming themselves for sticking to a non-sustainable business model that is no longer feasible in modern times.

Manipulation of supply to create a false scarcity coupled with continued price increases aimed at creating the illusion of rising value can only work when the public is unaware.  Thanks to the internet, secret manipulations are nearly impossible to keep hidden.  The iron-fisted control and game-playing of the cartel is now public knowledge.

The real reason the diamond industry is failing is simple…people are not buying them. While consumers still enjoy the beauty of diamonds, they no longer trust the diamond industry.  Instead they are turning to products like electronics with features they can understand and clearly labelled specifications.

For the diamond industry to recover its market, two things are necessary:  Free-market pricing and transparency.  Modern diamond buyers want to know that the price they pay is based on actual supply and demand, not manipulation by greedy corporations.  And they will want proof that the product comes to them from socially responsible sources, flowing through open and fair channels of distribution.

Romantic marketing may be able to create a desire for diamonds, but it will take a drastic restructuring of the industry and supply chain to turn that desire into sales.