For centuries people have been fascinated by the beauty of Opal. The constantly shifting, ever-changing colours captivate the imagination.  Opal is a natural kaleidoscope that can be fashioned into jewellery. Opals can be found in many parts of the world however Australia has always been considered the source for the world’s finest stones. But now there is a serious contender for that title.

Around 2008, a large deposit of opal was found in Welo Province, Ethiopia. The opals are mostly translucent to transparent with body colours ranging from greyish brown, to yellowish brown, and on up to a water-clear colourless crystal. The play of colour is strong and bright. Surprisingly, flashes of red are predominant while blues are harder to find. This is the complete opposite of Australian opal. 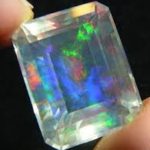 One of the rarest forms of opal called “contra luz”(against the light) has been found in Welo as well. This type of opal only shows the play of colour in transmitted light and can sometimes be faceted to create an eye-catching gem. Welo opal can display some unusual and quite striking structures. A study of these “digit patterns” was published by Gems & Gemology in the fall of 2013.

Most Welo opal is hydrophane, meaning water-loving. It is very porous and if immersed in water for a few hours it can gain up to 8% in weight. This will cause a change in appearance and may alter or even eliminate the play of colour. But allow it to slowly dry out over several hours or days and it is as good as new. Caution should be taken that the stones are not exposed to oils, chemicals, dyes or stains. This is something that you want to be sure to discuss with your customers so they completely understand how to proper care for their stone.

There are several treatments that are used on Welo opal. One of the most common is a smoke treatment to create a black body colour. There have been experiments with different coloured dyes but so far they don’t look natural and they hide most of the play of colour. Opticon and cyanoacrylate are sometimes used as sealers to stabilize against the hydrophane effects with mixed results; usually diminishing transparency and quickly wearing off. As always, all treatments must be disclosed to your customer. Better yet…get untreated stones!

For the last several years Welo opal has been red hot; its market share is gaining rapidly while garnering respect as a world-class gem.   This year in Tucson, Australian opal was scarce and Welo opal was plentiful.   The prices are reasonable compared to similar grades of Australian opal but exceptional Welo stones, especially contra luz, can command several thousands of dollars per carat, even in a small stone.

Fiery beauty, availability, and affordability. What more could you want from a gemstone?