The search for gemstones is the subject of the latest series of reality television shows. The Travel Channel released “Gem Hunt”, a show following three gem dealers as the search the world for fine coloured gemstones, often at the request of wealthy clients. Their quest usually takes them to a gem mine, hoping to snatch up a stone fresh from the earth.

On the surface, this show seems like a good idea. It exposes a large audience to gemstones and their journey to market. But unfortunately they display a false impression of the gem business. Rather than converting to local money at a licensed currency exchange, they seek out back-alley black market deals. Using brutal negotiating techniques to squeeze every last penny of profit from the deal, they leave very little left for the miner or dealer. They leave the area bragging about the deal’s obscene profits.

Not wanting to be left out, The Discovery Channel responded with “Game of Stones”. This show is so poorly and obviously staged that it is hard to watch. In the style of Indiana Jones, the four gem seekers smuggle guns and large amounts of cash across borders and through mine fields.   They face down armed bandits who amazingly don’t seem to notice the camera crew. They bid hundreds of thousands of dollars against other high level dealers to claim a rare stone.  The show is nothing more than a badly produced adventure tale. 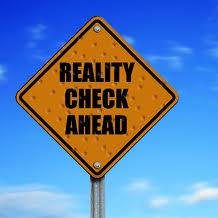 Stay alert to the “Reality”

While these shows are aired strictly for entertainment, they both claim to be accurate portrayals of gem dealers in action. The problem is…a significant portion of the viewers will believe it to be reality. They make gem dealers look shady, greedy and ruthless. The jewellery industry has enough problems with consumer trust and we sure don’t need to add more fuel to that fire.

We can turn these shows into an advantage, especially in retail. They get people interested in gems and the topic will come up in conversation. Watch an episode or two online just to get an idea of the players and the games being played. If your customer mentions one of the shows just let them know that the shows are just for fun but the real gem industry is even more interesting. Share some of your own experiences, even if it is only a trip to another city for a gem show. It may be common for you but it is exotic for your customer.

Our industry is fun and exciting. I’m sure there will be more shows in the future. Ideally one or two of them will be a bit more realistic and show ethical and sustainable sourcing of the beautiful gems. Until then, share your own personal story of searching for the treasures in your store. Your customer will be the final chapter of the journey when the take the gem home.

← An exercise in futility – Truth matters!
Catch the fire with Welo Opals →