This is the largest and diverse group of products that you’ll see at a mineral show. It is also the most popular and often the most profitable.
Any mineral that has been cut or polished falls into this category. It can be a simple as cutting a geode in half and polishing the cut surface or an agate or other rock sliced and polished into decorative slabs. Since this category appeals to a larger demographic that is not as particular about unadulterated specimens, you will find the greatest number of treated stones. The most common treatment is dying a stone to produce interesting colours, sometimes subtle and often obviously not natural. Another common treatment is coating natural mineral clusters, usually quartz with metal halides producing striking, iridescent colours. These typically will have trade names such as “Aqua Aura” for quartz with a gold halide coating that appears as a metallic light blue colour. 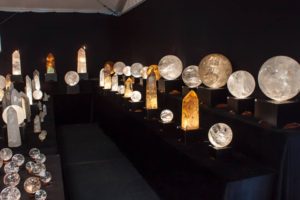 Some stones are cut and polished into geometric shapes such as pyramids and obelisks. These can be as small as a few centimetres or as large as several meters. Spheres and eggs are very popular and there is an entire group of people that collect them in as many minerals or colours as possible.

Many cultures and individuals believe that stones carry powers that can aid in healing, guide their meditations, or enhance the energy balance in themselves and the space that surrounds them. Almost any gemstone, mineral, fossil or polished rock can fall within this category. 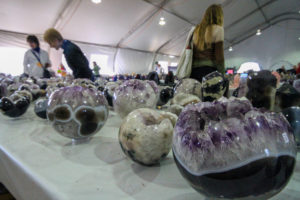 When you see someone at a show that is holding a stone in their hands with their eyes closed in deep meditative thought, or swinging a pendulum over a stone, you can be sure that person is feeling the metaphysical potential of the specimen. Natural crystals, massage stones, and spheres are very popular. Some will look for particular healing stones, sometimes called Vogel ponts, which are usually clear quartz cut to very precise angles and shapes as taught by a crystal healer named Marcel Vogel. These are often quite expensive but those seeking them will pay the price. It really does not matter what your own personal belief is about metaphysical stones, you can count on one fact…they are immensely popular and profitable.

It can be a small carved Jadeite Buddha or a large marble sculpture; this category contains stones that have been carved into images or fine art. A small Egyptian scarab in agate or jasper might cost a dollar while a beautiful carving in fine Jadeite may run as high as several million dollars. Roman or Greek classics like David or the Venus de Milo are priceless works of art with deep historical value. Consideration must be given to the material used, the subject matter and quality of workmanship. High value items are usually sold at auction.

The Mineral & Gem Asia show starts in a few days. I hope this series of primers can be of assistance in understanding some of what you will see and learn at the show. Be sure to attend and don’t be afraid to ask questions of the vendors. This may open an entirely new line of exciting products to sell in your jewellery store.

← Mineral & Gem Asia: A Buyer’s Primer Part 2
A New Way to Get Millennials interested in diamonds! →