Fossils are the remains of living organisms, impressions and moulds of their physical form, and marks or traces created in the sediment by their activities. Fossilisation refers to processes that enable the preservation of organic material. Petrification is the process by which organic material is converted into a fossil through the replacement of the original material and the filling of the original spaces with minerals. Petrified wood is a good example of living material that has been turned to stone while preserving its physical and cellular structures. Opal is often formed as part of a fossilization process when the original organism, often a shell or tree limb, dissolves and leaves a void in the sediment that eventually fills with silica.

Fossils can come from both the plant and animal kingdoms. Fossils usually fall into cabinet, decorator, and architectural sizes although microscopic specimens can be valuable in scientific research. Some like shells, leaves and fish are very common while full sized dinosaurs are rare. 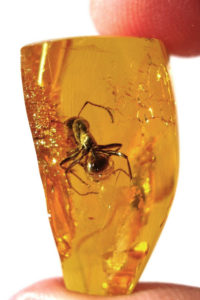 Virtually all fossils undergo some form of preparation and repair. Skilled craftsmen with small dental tools or mini-sandblasting pens will isolate a nice fossil from its host rock. Repairs are common and can be anything from gluing or reattaching broken bones, filling voids all the way up to recreating missing skeletal parts. Collectors look for rare species and try to find complete specimens with as little repair as possible. Palaeontologists use fossils to study extinct species or to trace the evolutionary process. Prices range from less than a dollar for common shells to several million dollars for a full-sized dinosaur skeleton.

Amber is a unique fossil material. It forms from tree sap that is aged and compressed over several million years. Amber often contains trapped bugs or plant material. The amazing thing about amber is the fossil is perfectly preserved without replacement of its own material. The actual bug or leaf is intact, complete with its DNA. The Jurassic Park movies are based on the theory that this DNA can be extracted and cloned to reproduce extinct species. Amber is a valuable specimen for scientific study and also makes beautiful jewellery.

Some other fossil materials can also be fashioned into jewellery. Ammonites are shells that in smaller sizes are often set as pendants while Ammolite is a gemmy Ammonite material that, due to separations in the layers of the shell, resembles opal. Bits of polished petrified wood and coral are popular in silver jewellery. One of the more unusual fossils used for both scientific study and jewellery is Coprolite…fossilized dinosaur poop. It is valuable for studying the diets of dinosaurs and is quite striking when polished.

Fossils are some of the most interesting and exciting specimens you’ll find at the show. Be sure to check them out.