The US cruise industry generates over $30 billion a year in revenue. Each ship visit can add around $1 million to the local economy. There are close to 200 cruiseships that bring over 14 million passengers to a handful of small island nations in the Caribbean Basin and The Bahamas. Some of the islands are quite small. The island of St Martin is 87 square kilometres and divided between two countries; France and the Kingdom of the Netherlands. For many of the islands In the Caribbean, cruise tourism is the only source of income.

All of the shipboard marketing. including the port talks. are owned and run by independent contractors who hire and train the shopping experts and port lecturers. They also provide training to cruise directors and other crew members who work directly with passengers. They collect the commissions and fees, splitting the profits with the cruise line.

Not all stores participate in cruise promotions but the ones that do will see more traffic and more sales but at a much higher cost. Other stores believe their own marketing and reputation will draw customers and don’t feel the need to partner with the promoters. Still others are quite happy with the overflow from everyone else’s marketing efforts.

The Caribbean jewellery industry is a confusing and misunderstood market. The Caribbean has been associated with gold, gems and jewellery since the days of the pirates. Eventually the pirates became legitimate merchants and shippers, creating Duty-Free ports to encourage trading. 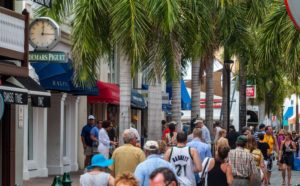 Many US jewellers tend to dismiss the Caribbean jewellers as nothing more than latter day pirates. While there are some stores that may have less than ideal ethics and business practices, the majority of the stores are sincere, honest, family run businesses. Some of the larger chains are very well run and professional.

This is not a small market of tourist trinkets. There are some serious sales being made. A small family run store will need to have over $1 million in sales to survive. Annual revenues in the $5-10 million range are typical. Six-figure days can happen at any time. For the more exclusive stores, seven figure single items will sell more often than you might think.

These floating jewellery selling machines have been operating for several decades, perfecting their systems and driving jewellery sales. It worked beautifully and built a massive retail jewellery industry. But the market is changing and neither the promoters nor retailers have caught on. There is an understandable reluctance to change something that has worked for generations. The machine will still keep churning out the shoppers; it’s up to the stores to figure out how to continue catching them.

Cruising is becoming popular in Asia but the emphasis is still more on touring rather than jewellery consumption. I am sure they have strong local product promotions appropriate to each country but the intense promotion of jewellery that we see in the Caribbean has not hit the Asian ports. yet. But it will.