In the wake of highly visible lawsuits, the banning of all EGL reports from Rapnet and a specific ban on EGL International on Polygon’s Cert-net; newly appointed EGL Global manager Menahem Sevdermish announced the retirement of the EGL International brand name. He plans to re-establish the EGL global brand with a well-defined set of standards that will be consistent throughout the international network of labs.

Reactions to the news are mixed. Many people applaud the fact that EGL is taking take steps toward a more consistent product while others feel that a new name will be the only change and it will just be business as usual.. Mr.Sevdermish already stated that the new labs will still use their own grading protocols and will grade to their own standards which are not necessarily the same as GIA’s. 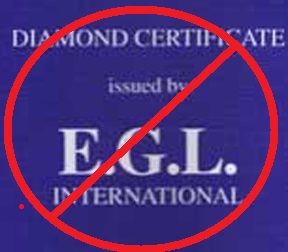 Mr. Sevdermish is well respected in the industry with an illustrious history founding the first gemmological institute in Israel, GIPS,in 1975 (currently EGL Platinum.) He pioneered the Gemewizard colour description system. Restoring trust in the EGL overseas brand is a daunting task. Years of inconsistency, controversy and outright abuse destroyed their reputation in the trade. There are too many EGL International and EGL Israel reports in the market that state “no fluorescence” on stones that glow brighter than black-light poster from the 60’s. A difference of opinion on grading is one thing but blatant miss-representation of a fact like fluorescence is quite a different issue. It gives reason to wonder if the stone was actually examined. Hopefully he can build something from the ashes of EGLI.

Mr. Sevdermish asks the question: “Who is to say the GIA scale is better than EGL’s?” In one way he is right; diamond grades are opinions and opinions are like noses…we all have one and it smells. The answer will come from the market itself. The trade recognises GIA’s lead and it is reflected in the price. Diamonds with GIA reports sell at a premium while EGLI reports are sold at a deep discount. That is the only proof that matters.

EGL USA once again reminds us they have no affiliation with EGLI or any other overseas EGL lab. Yaakov Tversky, director of EGL USA states they will adhere to GIA standards using GIA graded master sets.

A better approach might be to extinguish the EGL brand completely, including EGL USA, and start fresh. It may be more effective for all concerned. It would make a clear separation between USA and overseas labs instead of sharing the same brand. Even better would be a proprietary grading system that is not based on GIA, further establishing new standards.

For now, all we can do is wait and see what develops.

← The Holidays have moved online
It’s the home stretch. →