We all know that inclusions in diamonds can be a bad thing. Nearly invisible specks inside a diamond can have a tremendous effect on value. However, inclusions play a major role in the world of coloured gemstones. Inclusions are a very important part of gemstone identification. They can be indicators of species, origin and treatments. As with diamonds, if inclusions are too numerous they can have a negative effect on beauty and value.

In some cases inclusions are desirable in coloured gemstones. Horsetail shaped inclusions inside Dementoid Garnet are not only identifying characteristics, under magnification they are quite beautiful. In fact, Dementoid Garnets with well-formed horsetails are very desirable and often carry a significant premium in the market.   Collectors seek out gemstones that display inclusions that are unique to the species; Lilypads in Peridot, 3-phase inclusions in Colombian Emerald, even insects in Amber. Microscopic inclusions cause the optical effects of asterism (stars) and chatoyancy (cat’s eye).

The real fun comes when inclusions are large and bold enough to become an essential part of a stone’s beauty and interest. The Quartz family is known for interesting inclusions. Rutilated Quartz contains crystals of Titanium Dioxide, sometimes radiating from a dark grey cube of Hematite in a captivating starburst of brilliant metallic gold needles. Tourmalinated Quartz looks like small black or dark green rods frozen in clear ice. Many minerals can form inside Quartz; sometimes as floating crystals other times appearing more like a colourful coral reef captured in stone. They are beautiful to the eye and even more fascinating under a microscope. 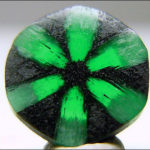 An example of Trapiche.

One of the hottest collectable inclusion stones are Trapiches. Meaning “wagon-wheel” Trapiches are usually cut as a cabochon or as a flat slab. The typical appearance shows spokes radiating out from a central hub with contrasting colours or a different mineral between the spokes.

First found in Colombian Emeralds, we now find Trapiches in Sapphire, Ruby, Quartz and several other species including diamonds.  Trapiches of any species with good colour and distinct, well-defined spokes are in high demand and the prices are rising quickly. Grab them when you see them.

Gemstones with interesting and visible inclusions offer jewellery designers a broad palette of colour, shape and texture. Inclusion stones can be very affordable or very expensive. Commercial grade inclusion quartz can be had for less than a dollar per carat while superb examples of Rutilated Quartz could fetch over $100 per carat, even more if cut by a top artisanal gemcutter. A large Trapeiche Emerald with deep green colour and well defined spokes can run well into the thousands of dollars per carat.

← Artisanal Gemstones: The Cutting Edge of Colour
It’s time to colour your Christmas →